I am new to the community, actually new to the concept of even being part of a community. I know, I know where have I been for the last 20 Years lol.

Building a robot has always been one of my childhood dreams but being limited to my understanding of electronic circuit design, this dream seemed out of reach. I didn’t just want to just assemble an already designed robot from of the self, any person could do that. I wanted my own, myne, personalized.

Thanks to all of you and the old Netduino forum this dream is now in progress.
Armed with my knowledge of C#.net (Diploma) and a netduino plus 2 board I set out to do what I always dreamed, build my own robot.

I started of simple, first things first it had to be able to move around.
I collected and gathered all resources I could find laying around the house (old children toys) that I thought could possibly be potential robot material. (Funding not being part of the project)
A couple of wheels, motors, a old meccano set, this and that and I was ready to go.

I started constructing the base of my hope to be soon robot.
a trike with 3 wheels, 1 motor for forward and backwards and 1 servo to turn the one wheel.

Unfortunately as all newbees I ran into a couple of issues, but by reading thru a lot of all your guys and girls posts etc I was able to over come a lot encountered problems.

I managed to get my motor to run, speed up and speed down. A transistor here, a resistor there and trala it was moving forward. My next step was to get it to turn. Getting the servo to work and to the right degrees was not the easiest, my programming skills saving me here.
Then a set of Xbee wireless serial shields fell into my lap and the project took a different direction.
With wireless serial I could add manual controll to my robot via a controller of sorts couldn’t I?

Got a couple of potential meters (Also laying around the house) and another Netduino plus 2 and set off to explore the world of wireless serial.

Using the one Netduino and Xbee as a transmitter that reads the potential meters and transmit the readings (manipulated of course) to the other netduino with Xbee as a receiver to control the motor and servo based on the received readings.

IT WORKED I could manually control my base of my robot.
I know that wireless remote controlled cars etc have been on the market for years so re-inventing the wheel is no great feet but I DID it I BUILD IT, I made it do what it was doing, It was myne one of a kind.

The next step was to get the motor to swap direction from forward to backward, have tried relays and transistors and even went so far as to gain a bit of electronic knowledge to build a H-bridge but unfortunately my gathered resources of 2N2222A transistors and built circuit did not want to function correctly. I had hit a wall. I did some more researched and found that my proposed components being used was most definitively not realy suited for the application I was using them for. Furthermore other simialer circuits had many more components (resistors, diodes etc) for what reason I barely understand the use off.

Frustrated I parked the project for a time calmer minds would prevail.

But now I had a problem, I had started enjoying my time with my netduino boards and not wanting to frustrate myself with my current issue, I decided to take a different approach.

Having only 3 servos, found in my gathered supplies. I set off to see if it could be done. How difficult could it be to make something that would walk instead of roll.
Walking is simple right. Pick up one leg, move it forward, put it down. Pick up other leg etc?

Not so easy when you have to start thinking about weight distribution, range of movement, force of impact, balance. I stopped my brain there…

Just try it I thought. So I did.
I built two sets of 2 legs for each of 2 servos for left and right and a tilting platform for the other servo to lift the legs on either side.

Put them together and added a netduino for control. Hours of programming and coding and it started to move. IT,S ALIVE, IT’S ALIVE. But a drunken sailor could not have been more useless at walking.
The legs wouldn’t sync with the tilt shifter due to balancing issues and the poor thing would tumble over time and again.

I should have adhered my brains advise … balance is important FACT.

Re-looking at my design I realized that the tilt and grounded legs were not triangulating at all the various degrees the legs turn to…
Fixed that, altered some code and… I now have a servo controlled walking base. 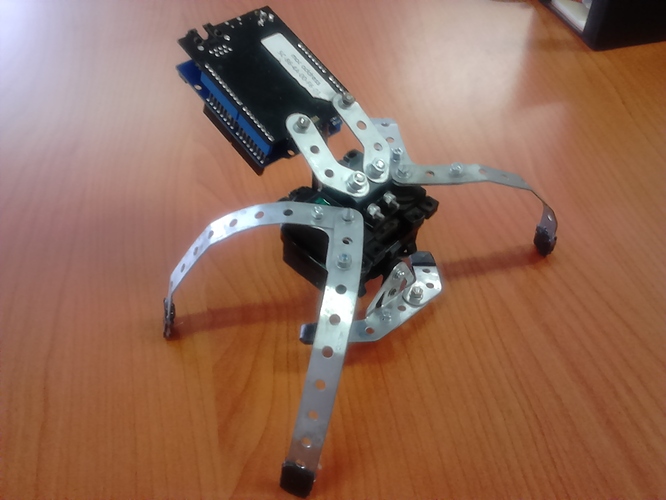 DSC_0046.JPG2048×1536 438 KB
Unfortunately I currently have to power it thru my PC’s USB as a single 9V battery does not do the trick. A power supply circuit is in the near future.
Once done (hopefully it workes) I can move on to adding sensors to make it be able to interact with it’s enviroment and making it a true robot.

So thanks you all once again your contribution is invaluable.

Will provide video and code once I figure out how.

This is awesome!! You should consider posting the project on hackster.io!

Hi thanks for the reply and advise, will do.

William, it’s a great start, and if you are still on the wave of the interest to servos, we would like to invite you to share your experience with us. Rozum Industrial Servo Producer is a professional servo manufacturer and we are looking for such enthusiasts as you to join our team. Get in touch with me.