After nearly a year of not touching my Netduino, I saw that the Maple bug that blocked my advancement was fixed.

However today after most of the day I am stumped again… I have downloaded the newest Maple example too as well as my old app that started but died when the HTTP web request happened 2-3 times. It seems that when I get the IP Address I am seeing NULL Reference exception. I hope that someone can help me get past this?

It seems that I get an Exception in ApplianceHost–>Program.cs–>InitializeNetwork() at this line:

Here is the output:

I’m going to try and reproduce this later today.

I’m having problems reproducing this. Any chance you could make your project available somewhere?

Could you also let us know the firmware information from the board. You can get this from MFDeploy. Connect to the device and then select Target -> Device Capabilities. You should see something like this:

There’s a lot of other information but for this I think we only need the first couple of lines.

I also attempted to run MFDeploy and do not see a Target -> Device Capabilities. My Netduino is connected and available but …? I am missing something here but I have a bad feeling my Netduino is bad. 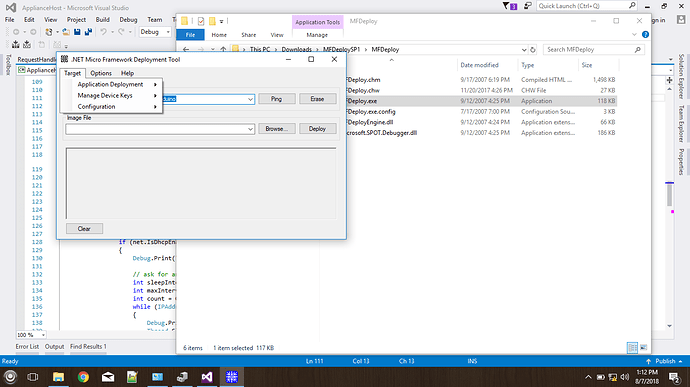 I have attempted running everything as the Administrator and not with the same results.

I’ll grab the Coffee Maker example and have a look.

The version of MFDeploy I use is found in the .NET Microframework SDK. On my machine the full path is:

I think that the recent post has helped in this issue … if you look https://github.com/WildernessLabs/Netduino_SDK/issues/7 - scroll to the bottom of the explanation you will see that it mentions calls that fail. The ApplianceHost project is calling the very last method.

I just got a bright idea that I can try and set everything up on my Mac Mini and attempt to run ApplianceHost there. It might be a good data point.

One thing I noticed is that you have to Connect to the Netduino first to get output. I also erased the memory and re-deployed. Once I run ApplicanceHost I see network NULL exception.

I could not for the life of me get ApplianceHost running on my Mac - it seems to just hang for a very long time.

On my drive into work this morning and thinking about this. I kept thinking about the guy having trouble with MFDeploy and part of the Wifi parameters are grayed out. My network has a password and I have a 2.4 and 5 GHz channel. Is it possible that the Exceptions I am seeing is from not having the Wifi channel, user and password? Its could be trying to connect to some unknown Wifi channel.

I am at work now but something to chew on. I’ll try and get home tonight and see how to get the Wifi details section to be available.

I’ve had a go with the coffee maker example and I get a valid list of interfaces when using a static IP address. One thing I did have to do was slow down the application a little as the board took a little while to actually show that it had connected to the WiFi OK.

After great difficulty I finally got my Netduino to connect to the WiFi. However, once the application starts and I attempt to get the status I get a NULL reference exception. Not sure where to go now exception the Maples source code but hope you have an idea?

The document has moved here.

Glad to hear you are making some progress.

The Maple source code is available in the Wilderness Labs git repository. I’d try downloading the Maple sources and reference the Maple project in yours. You should be able to trap the exception.

This still the connected coffee code ?

Yes I had a hell of a time getting the settings correct in MfDeploy so that the CC3100 exception did not happen.

I am going to pull the Source and will look to adding some kind of documentation regarding the MfDeploy settings and WiFi - hopefully this will be my first post.

I’ll try and get to the Maple src this week but hard with work and the wife.

Thank you a lot,
Brad

We just released the beta of Netduino 3 Wifi 4.3.2.4 firmware which has stability fixes. Try it out and let us know how it goes.

Guys I grabbed the beta firmware and did some experiments with 2.4/5Ghz networks and it seems that the IP.LinkLayers.CC3100 error comes from an invalid Wifi setting.

Thanks for the help…